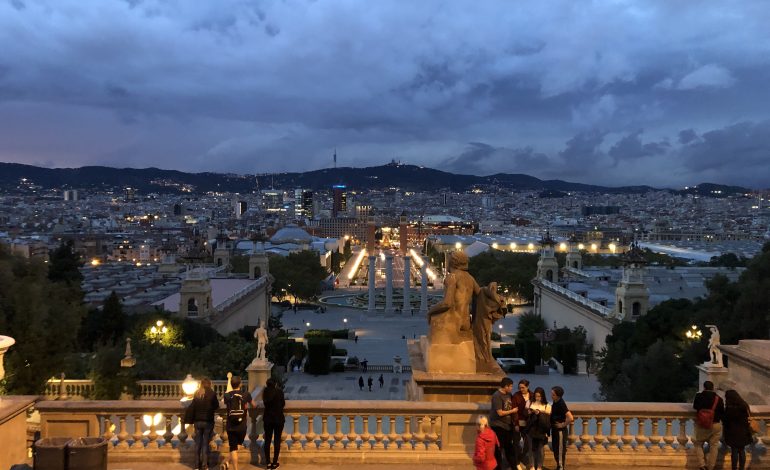 Every year millions of people from all around the world travel to the mesmerizing seaside city of Barcelona, Spain. Barcelona is famous for its

Lose yourself in the variety of Barcelona destinations such as gigantic Roman ruins, Gothic churches, and regal cathedrals straight out of the 14th century, among many other attractions. A number of tourist offices located at strategic points around the city assist Barcelona travelers. These tourist offices exist to help you discover the city so take advantage of them.

Here are some of the top tourist attractions in this vibrant capital of Catalonia.

One of the most eccentric yet beautiful churches in Europe, this basilica is breathtaking and is one of, if not the most famous sight in Barcelona.

The Basilica de la Sagrada Familia is located within the northern part of the capital. It overlooks its surroundings with eighteen tall and narrow spires reaching way above all the other surrounding monuments.

Antoni Gaudí was appointed in 1883 to design this basilica from scratch as a neo-Gothic church.

Instead of staying with the original plans, he opted to create a delightful signature example of his famous, if unusual Art Nouveau architecture. He, in fact, had no solid ideas in mind, he simply set about altering and adding to the existing plan as he progressed.

Despite Gaudí’s main plan of completing this exuberant masterpiece within a ten to fifteen-year period, construction of the church continues today. Construction is ongoing and the current plan is to finish in 2026 – the centennial anniversary of Gaudí’s death.

The elaborate exterior with its distinct facia portraying the birth of Jesus entices visitors from afar. The expressive facade illustrates the suffering, death, and rebirth of Jesus Christ.

The interior is as equally marvelous – a cavernous space about ninety meters in length, and up to sixty meters high. Inspired by nature, Gaudí designed columns that look like plant stalks. Embellishments and lavish decorative details adorn the ceiling. Sunlight streams in through the tinted glass windows – an illustration of heavenly light.

The crypt holds an unusually designed Crucifix formed as a canopy – including lanterns, making the overall effect humbling and breathtaking all at the same time.

Designed and built between the years 1900 and 1914, the Park Güell is an amazingly designed piece of architecture. It was originally designed to include a housing community. Although the home sales failed, the park lived on and features the signature style of architectural elements unique to Gaudí.

The masterpiece includes an array of viaducts, winding staircases, grottoes, a columnar hall, and semi-closed benches that are present throughout the space. The architecture can be touched and used instead of just decoration. The walls, seats and tables are embellished with ceramic fragments of stunningly colorful varieties. Take a look at the piece below which is modeled after a wave.

A grand terrace offers splendid scenic views of both the city and the sea. Gaudí himself was very fond of this area of the city. He enjoyed it so much that he located his own personal residence here.

Surrounded by the most beautiful garden, the Casa Museu Gaudí holds the house where Gaudi lived. The collection displays intricate works of art, decorative pieces, and furniture, all of which were designed by Gaudí.

Another outstanding creation of Gaudí, the Casa Batlló. In 1904, Gaudí remodeled Casa Batlló into one of the most contemporary buildings in Barcelona.

Gaudí designed this remarkable mansion as a private residential area for the textile industrialist Josep Batlló I Casanovas. With its freely swinging shapes and ornamental design, this enchanting building looks like a castle straight out of a fantasy fairy tale.

Most of the construction details are totally different from any of the pre-existing architectural designs. In keeping with Gaudí’s tendency toward nature, the window frame on the first floor is bordered by intricate swinging shapes that seem like plants. Other windows resemble entrances to caves.

On the front, glazed ceramic tiles in green, blue, and ochre colors add to the extravagance. The wave-shaped roof has a number of lavishly decorated chimneys.

Gaudí also designed the interior decorations, which can be observed in the Casa Museu Gaudí in the Güell Park.

For about two millenniums the Gothic Quarter has been the spiritual and secular center of Barcelona. Parts of ancient Roman buildings remain in this area. However, the historic monuments packed into the Gothic Quarter transport visitors to the Middle Ages.

A magnum opus of Gothic architecture, the medieval cathedral stands on Monte Tabor, the highest point in the town center.

The Catholic Monarchs received Christopher Columbas after his first voyage to the New World in the Gothic Quarter. Since the 14th and 15th centuries, the city manager has also held its seat here.

One can stroll through this amazing maze of narrow cobblestone streets and alleyways to discover this fantastic traffic-free medieval world.

Discover scenic quiet squares, made more vivid by the sounds of people chatting and laughing or the tunes of Spanish guitar.

The Gothic Quarter is known for its appealing boutiques and restaurants. Plan to search out the Picasso Museum and the Plaça del Rei – a square with occasional outdoor concerts.

One of the city’s most remarkable landmarks, the ancient cathedral is located in the Gothic Quarter. The Barcelona Cathedral is a Roman Catholic cathedral that still serves as a place of worship and celebration.

It’s also a major tourist attraction and a symbol of Barcelona’s status as an important Spanish city. Tourists search out the Barcelona Cathedral because of its Gothic architectural style. It’s located in the walkable center of the historic Gothic Quarter of Barcelona.

The most prominent features include pointed archways, the ribbed vaults which are visible from inside the Cathedral and the many gargoyles arrayed on the roof.

What most tourists observe when they arrive in front of the breathtaking building is none other than a 19th century add on designed to recreate the peculiar Gothic features.

The spectacular front design contrasts with the more traditional original 14th-century Gothic features observed along the sides of the cathedral.

Known as Barcelona’s social hub, La Rambla is a broad, tree-shaded avenue that divides the Old Town into two parts. It stretches from the Plaça de Catalunya, where the beautiful Romanesque 12th-century Convent of Santa Anna is located, all the way down to the port.

This wide street showcases broad pedestrian sidewalks lined with shops, restaurants, and boutiques. People naturally gather here, making it one of the most popular hangout spots in the city.

During the daytime, you’ll find locals shopping at the Mercat de la Boqueria. At night, groups of friends on their evening stroll enjoy the fresh air and rich ambiance. If you’re lucky you might be occasionally treated to live music, a mime show, or other entertaining street performances.

A monument worth visiting on La Rambla is the Palau Güell, a flamboyant mansion designed in 1886 by Antoni Gaudí. The owner, Eusebi Güell, was a great advocate of arts and crafts. The building itself reflects Güell’s wealth, with opulent decor, expensive textiles, and handcrafted furniture by Gaudí himself.

The Museu Nacional takes the visitors on an unforgettable journey through thousands of years of Catalan art, from the 10th to the 20th centuries.

The view from the Museu National is an awesome panorama of Barcelona.

Standing 173 meters above the port, Montjuïc Castle allows one to witness scenic views of the city. Now a remarkable tourist destination, this palace is actually a symbol of repression in Barcelona and also the city’s struggles during different periods of time in its history.

The castle was one of the focal defense points in the War of the Spanish Succession between the years 1705 and 1714. More recently, the castle launched bombing raids and acted as a military prison until 1960 when it was given back to the city.

Three years later the castle converted to a weapons museum . In 2007 however, the castle came under the control of Barcelona City Council. It is now open to all the citizens of Barcelona.

The train trip to Montserrat takes about 2 hours from Plaza Espanya via the R5 line. The train takes you to the bottom of the mountains but you’ll need to purchase a ticket on either the cable car or the rack railway to get up to the monastery. At Plaza Espanya, purchase the ToT ticket which includes both the train and the rack railway together as a round trip ticket. The ToT ticket also includes entry into the Montserrat Museum.

Consider hiking in the Montserrat mountains by taking the Sant Joan Funicular to the top of the ridge. Even the funicular trip to the mountain ridge top is spectacular as shown below. Additionally, there are older monastery ruins that are a short hike once you are at the top station .

Of course, ideally, the traveler would visit all eight of these magnificent locations. However, if time is short, see how many you can tick off your list. Even one will leave you in wonder and awe of Barcelona.

If this has been useful, we’d love to hear from you, feel free to get in touch and let us know your thoughts.