From almost-National goalkeeper to rising star in wrestling. Gaining 35kg in muscle mass was a life-changer for Tim Wiese.

The second round of the UEFA Champions League Cup in 2006 should have been a first milestone. He himself saw the match as the most   important one in his career. The jersey he wore that night in Turin was tight fitting like the wetsuit of an Ironman   contender. Its squeamish pink color alone would have branded his name into the minds of the millions watching. On that tuesday night Bundesliga club Werder Bremen saw a tall and slender youngster guarding their goal. Boyish-looking Tim Wiese was ready to deliver.

The match itself saw a competition among equals. Everything was indicating a penalty shoot-out would have the final say, something the agile Wiese was anything but afraid of. And then came the 87. minute. Through his enormous jumping power, an asset for which he had already gained a reputation, Wiese has able to catch a flank from a sharp angle. Trying to buy time – it was the last 180 seconds of the game – Wiese threw himself onto the ground. And here the tragedy began.

The ball slipped out of his hands, Turin’s Emerson said ‘thank you’, and Bremen lost 1:2. What was supposed to become Wiese’s big night became a desaster. Fast forward a decade later and nothing about the 34-year-old TimWiese reminds of the young talent in a semi-outlier club he once was. Wiese doesn’t even play football anymore. Standing 1.93m tall and carrying 121 kilogram Tim Wiese has become a human wall with arms the size of tree logs. His tattoos stretch from wrist to neck. Still, the ghastly night In Turin Wiese remembers very well.

“I Simply Was a Goalkeeper Who Had Made a Mistake”

“I just wanted to disappear,” he confesses, breathing slightly under his voice-an obvious tribute to his enormous body weight. “For two days I felt like crap. In that situation I simply was a goalkeeper who had made a mistake”. Wiese is then quick to add how he dealt with the defeat mentally. “There might be others who break over such an experience. But not me. I never did.”

The one thing to make Wiese trip was no mistake like the one back in 2006. It was more of an unlucky decision. In 2012 Wiese decided to leave Werder Bremen. Playing there for more than seven years Wiese had given a new face to the second-tier club that from time to time was at the verge of dropping out of the Bundesliga. Together with names like Marco Bode and Mario Basler, both of them long-served members of the German national team, Wiese helped bring Werder Bremen to the forefront of big-league European football. With Wiese’s performances Bremen became a regular in the finals and semi-finals of Champions League.

The Beginning Of The End: TSG Hoffenheim 1899

This all changed when in 2012 Wiese made Bundesliga novice TSG 1899 Hoffenheim his new cadre. Hoffenheim was a club with a history second to none. Mainly in the sense that the club had no history at all. Founded in 1899 Hoffenheim remained a third-, fourth- and even  fifth-tier club for a full century until SAP co-founder and billionaire Dietmar Hopp invested a total of 240 million Euro into the club. 24 million of that sum were planned to be spent on new talent alone, and Wiese had gained Hopp’s attention early on. Talks went well, Wiese signed for four years, and Werder Bremen soon was a matter of the past.

There are voices saying that Wiese’s move was a final attempt to establish himself as Germany’s National goalkeeper. Wiese had taken up that position before when Germany took up on England in 2008, a match that Germany lost 1:2. Germany also lost the five other matches in which Wiese wore the “1” on his back. But as the indisputed number one in a new and emerging squad – Wiese was immediately named team captain once he arrived in Hoffenheim – his talent was guaranteed to flourish. If a striking performance with Hoffenheim would not convince national coach Joachim Löw, nothing would.

In the end it was to be all different. In his four-year contract Wiese only played eleven matches for Hoffenheim, many of which would have to be considered a disaster. In one of the first matches under Wiese’s reign first-league Hoffenheim faced unheard-of third-league club Athletik Berlin 07 in the DFB-Pokal tournament. Hoffenheim left the annual tournament where the big players meet the nobodies with a 0:4 humiliation by a Berlin 07, a club that saw students and blue collar workers among his squad.

“Tim was in no good condition when he was with us,” former Hoffenheim coach Andreas Müller said in an interview. “He told us what state he was in. There was no alternative to taking him off the first team.” Müller’s statement remains as one of the view public allusions to what state Tim Wiese must have ben in when he was in Hoffenheim. What ‘state’ was that?

“The Goalkeeper Plays in a Psychological Position, And He’s Dealing With Mental Things” (Oliver Kahn)

When national goalkeeper Robert Enke took his life in 2009 it quickly became a common place in German football that goalkeepers deal with an above-average level of stress. A level that easily exceeds that of field players: living solely off their wits and reflexes goalkeepers remain a true one-man band in an otherwise well-orchestrated orchestra. Their job has no backup plan. Should self-doubt or anxiety arise field players can always enter into a mode of social-loafing – they will simply stop setting themselves free from marking and thus can avoid making mistakes visible to others – goalkeepers literally have nowhere to go.

Moreover, raging fans have little interest in analyzing the full story behind the goal that eliminated their team from a tournament. Blaming the failure of the last man to stand between ball and goal line thus comes naturally-a fertile ground for stress-related diseases that have strongly increased among profesional athletes in Germany.

Even though allusions of Wiese suffering from depression never stood in the room, his unfavorable performance with Hoffenheim remained. How did Wiese confront his dismissal that unwillingly turned him into an early retiree at the age of 34? Wiese acted as his own spin doctor. “The transfer to Hoffenheim was the best deal of my life. Eleven matches and three years of paid leave – who wouldn’t want something like that? Hoffenheim was like hitting the jackpot,” he summarizes.

In reality, Wiese was taken out of the first team just five months into the contract. In summer 2013 he was made to train with the C-squad, an outright degradation.

Officially suffering from an undisclosed injury and laid off entirely, things then went quiet around Tim Wiese. Until the day when one picture from his facebook account, a bathroom selfshot taken in June 2014, started circulating around the internet like wildfire. The picture showed Wiese posing topless in front of what seems to be a gym’s locker mirror. It also showed that Wiese had prescribed himself an insane workout therapy to make up for his unplanned unemployment.

Gazing fiercely int his smartphone the Tim Wiese of 2014 had nothing in common with the boyish-looking athlete he had been until 2013. While Wiese always had a reputation for a well-crafted hairstyle and a stylish outfits the few pictures he released of himself after a 13 month ghosting from all major media spread around social media like wildfire.

Wiese appearing with his hair tilted all the way back, fully-geled on top of it, wasn’t exactly a surprise. His exquisite hairstyles were known to the public since his days with Werder Bremen. The one sthing to stand out was his bodily transformation. Tim Wiese no longer was the tall and slender goalkeeper that kept a low body weight in order to maintain speed and flexibility when saving unreachable shots. In 2014 Tim Wiese had turned into one of those men who more regular-built men jokingly ask whether their right arm “originally was supposed to become a leg”. With a gain of almot fifty kilograms in muscle mass Tim Wiese had become a beast.

Wiese himself took up on the turmoil erupting around his new look. First by words: “They say growing muscles is 70% nutrition and 30% lifting weights. If you don’t eat right, all of your effort in the gym will be going down the the tubes. So I usually eat a lot, on average it is 6000 calories every day. But most of the time it is much more than that.” 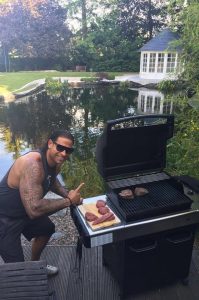 Then came visuals. In another attempt at self-branding – Wiese to this day has no PR agency representing him -, Tim Wiese released a couple of pictures that showed how his daily dose of 6000 calories came about. Most of his impressive calorie-intake would not stem from proteine shakes or the likes, but from a healthy serving of smoked ham to which he added a daily kilogram of bison meat. A bizarre choice even for the more experienced weight lifter.

The fact that Wiese brought home the proteine-rich goods “in-style”, which meant inside the trunk of his Lamborghini Aventador, only added to the buzz. The caveman-approach to nutrition struck a chord with the 18-24 crowd, comments on Facebook and Twitter exploded.

Wiese Stepts Into The Ring

Rumors about Tim Wiese starting a second career, this time in professional wrestling, were circulating as early as 2013. Back then, however, these were rumors. Even when he was spotted with a more filled-out appearance a couple of months later nobody took notice.

It wasn’t before the release of his locker room selfshot that the cat has been let out of the bag. Tim Wiese had officially left the football arena for good and turned it in for another arena, just as loud and flashy. The arena of professional wrestling. “I have loved wrestling since I was a little kid,” the industrious self-marketer said in an interview with the WWE Wrestling Federation. 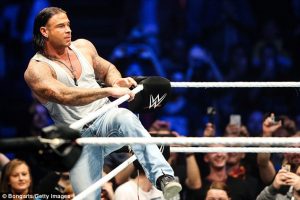 Still a guest star instead of a real contender Wiese first entered the WWE ring during an event in Frankfurt, Germany in 2013. Photo: Bongarts / Gettyimages / Dailymail.co.uk

Slightly re-framing his career in football as a detour before reaching his actual vocation, that in wrestling, Wiese soke about how serious he takes his new-found career: “Anyone who has met me knows about my rigourous ambition. When I was still a kid I would say to myself: ‘Come on, you gotta do this. You got to become a professional football player, the national goalkeeper, if possible. And I put in the work. Now, I try do to the same once more, only with wrestling. “

Wiese then spoke about the WWE performance center in Florida he was about to visit. “I take the offer I was given very seriously and am ready to give one thousand percent.”

Born in the Rhineland, where they tell it how it is, Wiese answered the  obvious questions about his diet and nutrition in his own unique way: “I’m looking  to munch down the one or other kilogram of bison until my flight goes.”

One can only wonder what further ace Mr Wiese has up his sleeves.

Read Next: Gaining Weight as a Hobby For Men