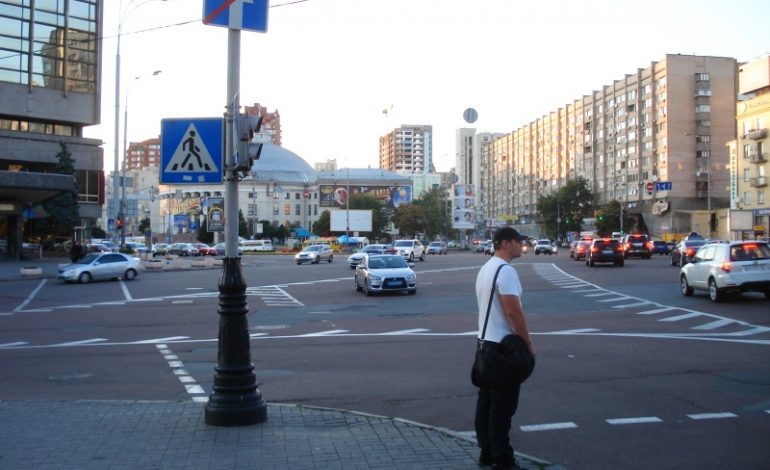 After spending almost the whole year of 2014 in Eastern Europe it is time to recapitulate how much of a culture shock it was adapting to everyday life in this part of the world.

The terms I initially used to describe what I see ranged from “different” to “unusual” and sometimes “absurd”. It took me a while to realize that living in this part of Europe hit me with something that I can now name as what it is: A severe case of culture shock. Even though you will make the same experience of culture shock (in varying degrees) in any Eastern European country I picked every day life in Ukraine as an example of how I was thrown in at the deep end.

Asking for directions in Ukraine

To say that the average Ukrainian is “reserved” would be an understatement. If I had to describe the common social atmosphere in Ukraine with one word then it would be “indifferent”.

Indifference is the common mindset Ukrainians have when dealing with people they have no relationship with. The most obvious display of indifference is that toward the average stranger on the street. Here’s an example:

The first city I ever went to in Ukraine was Lviv which in the west of the country. New in town and a foreigner on top of that I was often times dependent on the locals for directions. The reactions I received when approaching strangers in the street and asking for directions in my (then) heavily accented Russian were priceless.

Probably the most “indifferent” one was when I approached a middle-aged man in front of a phone store. The second he realized that Russian wasn’t first my first language he waived me off with a hand gesture the way you would waive or push off a dog that was trying to “dry hump” your leg. I was totally baffled and didn’t know what to say as he repeated his nasty hand gesture while he kept on walking past me, not uttering a single word.

This type of reaction occurred more than once when all I wanted was to ask pedestrians for directions. I even experienced a variation of the waiving-off gesture when a women raised her hand in a defensive manner and then took a huge step aside while walking past me, also not uttering a single word. I was obviously perceived of as some who must have had some kind of contagious disease.

Now, the Western term for such a reaction would be “rude”, bordering on “personal insult”. The only reaction that would exceed such a behavior to my understanding would be spitting out on the floor in front of someone.

Even though rudeness is the outcome of that behavior it is not the driving force behind it. As rude as it was this behaviour stems from the intense indifference Ukrainian have towards anyone who they have no business with. And a complete stranger in the street asking you for directions in a weird accent is just that. “Ukrainians don’t trust their fellow Ukrainians” is what a student in Kiev told me when I talked to him about my experiences of trying to get directions from strangers. Talk about culture shock.

To be fair it must be said that apart from these negative reactions there were many that were absolutely delightful and where I was helped out just like anywhere else in the world. Only these positive encounters were a minority in comparison to the indifferent one.

People Want To Get Something Out Of You

One aspect that often shows in the positive encounters with people is the fact that often times you will sense an interest in you from people that actually seems to be driven by self-interest. As a Westerner you will be seen as a man who locals might be benefited from in one way or another

I remember talking to a young man in a suit whom I approached in front of McDonald’s on Khreshchatyk. Our short encounter went as follows.

Language is king. On Kiev’s Khreshatik and anywhere else abroad.

When he realized that I was from abroad he opened up quite a bit and became visibly excited about the occasion of talking to an “interesting” foreigner. Talking to him I could always sense a subtle interest in me as if he was hoping to sell me something.

When I mentioned that I was on apartment hunt his eyes were lighting up. Visibly, he got a lot more vivid while he was talking: “Really, let me help you, I work in that field!” The experiences I made when trying to find a decent place without paying the “foreigner-surcharge” had taught me that the people renting out apartments are often not the most trustworthy. So the more he got excited talking about renting a flat the more I lost interested in talking to him. Because if there is one thing I had learned in the first weeks in Ukraine then that accommodation, in any case, is a rip-off.

Before our conversation began he had called him himself a taxi that was now arriving. I had a hard time turning down the ride he offered me. He finally gave up and handed me his business card: “I do real estate, business, everything. Call me!” – I waited till his taxi drove off then threw away his card.

Another time I was looking for a street in the district of Podil.

I approached three people in Russian who had no idea about the street I was looking for. Frustrated, I decided that from now on I would concentrate on asking professional-looking for directions. My thinking was that these people would be more likely to speak English and I was willing to put it to the test. Furthermore, I still wasn’t sure if I pronounced the name of my street right so asking in English would eliminate that option.

I was passing by the entrance of a one of Russia’s Sberbank franchises when a young man in a suit came my way.

As I approached him in English I could tell that hearing the English language made a huge impression on him. My theory on approaching only professionally looking people proved to be right: my prospect knew my street, spoke good English and even offered to walk me there. Jackpot!

While we where walking down the street he got intrigued by the fact I was from Western Europe and we talked about what it’s like to live in Ukraine as a foreigner. Unluckily for him, my street was not far away and after a three minute conversation our ways were already parting.

I still remember what he said last. He hinted at the Sberbank office where he was working and said I was welcome to come visit him any time. At this point it was not hard to tell that his kindness and his offer to walk me where I needed to go was rooted in with his hope of getting some kind of lead out of me. Be that in regard to a business offer, to a job opportunity or anything else.

Almost feeling about that I had nothing to offer to him I confirmed that I would “definitely” come by his workplace if I got to Podil again. Then I left.

In Ukraine there is no hassling of tourists as you will find it in the big tourist spots of Spain, Turkey or Greece.

More often than not, the latter is the case.

This article is an excerpt from my brandnew Kiev travel guide: The Ultimate Kiev.

If you found this article helpful then you will love the information you can find in The Ultimate Kiev.

On 204 pages The Ultimate Kiev contains everything the single traveler needs to know to make his stay in Kiev hasslefree and succesful. Whatever culture shock may be waiting you, The Ultimate Kiev will have you well- prepared.

Get my Kiev Travel guide here.

Read Next: The Oligarchs’ Ghost Town