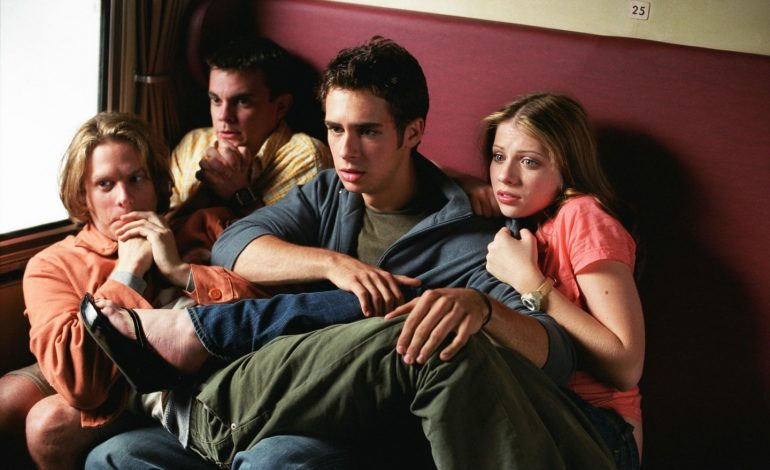 Europe According to 2004’s Eurotrip

Deserted ghost towns, luxury hotels for next to nothing and a green Absinthe fairy – this is Europe according to the movie Eurotrip. But what if fiction meets reality? It’s time to debunk some myths about the world’s most visited continent.

[miptheme_dropcap style=”book” color=”#222222″ background=””]A[/miptheme_dropcap]s Back To The Future II had predicted, October 21st, 2015 was the day we starting moving around in flying cars or, alternatively, stepped on our beloved hoverboard to hover skate wherever we wanted, relying on nothing but virtually thin air.

So much for the theory. In reality, however, things turned out differently.

But that shouldn’t keep us from taking the time to reminiscence about past movies’ glory. Turn back time for a mere decade or so and we get to the year of 2004, a tremendous year for the movie enthusiast. With more than a dozen highly successful Hollywood movies released 2004 has been the year of Tom Cruise’s Collateral and that of Matt Damon’s The Bourne Supremacy.

One almost forgotten fact is that 2004 has also been the year of the mind-blowing and box office-crushing blockbuster going by the name of Eurotrip.

Oh well. As you can tell by my over-selling, Eurotrip has been anything but a blockbuster. With about $25M in production cost facing a mere $18M in box office revenue it might just have been DVD rentals and merchandise sales that kept Eurotrip out of the red. And to add insult to injury there are even detractors who called Eurotrip a plagiarism of American Pie.

To be fully honest those detractors do have a point. First of all, Eurotrip, like American Pie, comes with an almost identical set up of characters. These include, among others, a romantically naive main character as well as a long-haired version of Stifler. And just like American Pie Eurotrip, too, mostly lives off stereotypes, sexualized jokes and slap-stick humor.

However, the one big difference to similar movies in the genre is that Eurotrip also is a ‘road movie’, if you like. All stereotypes portrayed in the film deal with – you guessed it – Europe instead of US college life.

This being said, Eurotrip acts as the perfect opportunity to have a closer look at the abundance of clichés that make up for the backbone of the movie. Dissecting some of the hear-say about the most-visited continent on earth will not only help us part some of the best cities in Europe from the worst cities in Europe, diving a little in the customs of the Old Continent almost comes naturally for anyone even remotely interested in traveling.

I have hand-selected three scenes out of Eurotrip and will give you the inside-scoop on whether these scenes, their clichés and their stereotypes are on the money – or whether they are nothing but a stereotype floating around in thin air.

This is not Europe according to Germany, to France, to Greece, to Italy, to Turkey. Or according to the United States, Vladimir Putin or even Silvio Berlusconi – this is Europe According To Eurotrip.

A misunderstanding with a bogus German truck driver gets the group of four to Bratislava instead of Berlin.

Poor Bratislava takes a heavy hit from the makers of Eurotrip. Personally, I believe it was for its rough-sounding name that made it the living image of a post-socialist nightmare for the movie. Roll the ‘r’ in ‘BRATISLAVA’ and it will smell a lot more of ‘Eastern Europe’ than unimposing city names like ‘Brno’ (Czech Republic) or ‘Lodz’ (Poland). What does the Eurotrip-scene on Bratislava have to do with the actual city?

The answer is simple: not much.

I could make it easy for myself and tell you that the run-down housing blocks shown in Eurotrip are actual run-down housing blocks of an actual ghost town that is located not in Bratislava, but north of Prague. The town of Milovice features deserted Russian barracks that have also served as the set for other Hollywood productions such as Hostel (2005) while today it offers tank driving lessons and paintball battlegrounds. But that is not the point.

The point is that the Bratislava of today is a stable Catholic city and the ever-shining capital of Slovakia.

Like most other cities in the region, Bratislava is free of deserted housing blocks. Instead it features a picturesque Old Town with many squares that will look just like the one to your left.

With a population of just 400.000 people Bratislava might not be the most thriving hotspot in Central Europe, however, it is a city of a high quality of living and that at moderate prices.

[miptheme_quote author=”” style=”text-left”]”Prices in Eastern Europe are so low they allow even the poorest Westerner to live in total excess.”[/miptheme_quote]

Stranded in Bratislava the group scratches together their last money, hoping to find a place to stay for the night.

Exchanging their left-over money into the local currency allows the protagonists to lodge in a 5-star hotel while they are getting massages and smoking cigars: ‘Gotta love that exchange rate!’ is the one line they use to explain their sudden riches.

While it’s definitely true that Europe, and Eastern Europe in particular, both have a lower cost of living compared to Western Europe or the US, the days of living like a king in Europe’s post-socialist countries are long over. Buying a beer at your local bar while out and about might still cost you half of what it would cost you in Paris or London – but that will be it.

For instance, Eastern European prices for electronics like apple products and notebooks are – by comparison – through the roof while the quality you will get will be much lower. The same goes for most types of accommodation. Be it hotels, apartment rentals or long-term rent, the cost-benefit ratio in regard to accommodation in Eastern Europe is often so bad it is practically bordering on extortion.

Partying in a humongous multi-floored nightclub they order a bottle of Absinthe. The Star-Trek looking green fluid has them hallucinating the infamous green Absinthe Fairy.

Make no mistake that discotheque-style nightlife as in Boogie Nights (Gloria Gaynor, not Mark Wahlberg) and the average European discotheque have nothing in common. The idea of having small-spaced venues like lounges or clubs is in fact a rather new idea to Europeans, only emerging since the 1990s. Especially outside of the city centers the concept of “discotheque” looks quite different: it’s not clubs, bars or lounges, but massive, anonymous and multi-story venues, often hosting more than 3,000 guest per night. Also, inside of these at times monstrously huge venues will you be caressed with mind-numbingly loud house and electronic music instead of those “disco” tunes John Travolta was dancing to.

The epicenter of Europe’s discotheque culture? Unlike what Eurotrip tried to make you believe Bratislava is far from being the thriving nightlife hotspot one might think. It is the neighboring Czech capital of Prague that is home to the (self-proclaimed) ‘Biggest music club in Central Europe‘. Named Karlovy Lazne the outrageously big Prague discotheque is the venue every European youngster has in mind when he plans the European version of Spring break, namely an excess-ridden weekend trip to Prague or Amsterdam together with his best buddy.

Oh yeah, almost forgot: While formally perfectly legal even in the US it is the psychoactive chemical of Thujone contained in Absinthe that is banned in the whole of North America and even the Fiji Islands’ neighbor state Vanuatu. In most European countries, however, a Thujone concentration of up to 35mg/kg is perfectly legal. As I was told by a local chemist specializing in alcoholic chemical compounds, the concentration of 35mg/kg comes down to “a whole damn lot, dude”.

Who would have thought that there is some truth to Eurotrip at all? I would! In fact, as exaggerating as the movie might be, there are several times when Europe according to Europe is right on the money.

At the same time Eurotrip is teeming with silly clichés of eery housing complexes that look more like an anticipation of 2006’s Borat than real life. Furthermore, the movie is teasing with quarter-century old stereotypes of low-cost Eastern Europe that are easily brushed off by anyone who ever tried to find cheap long-term rent in the hellhole of a renting market you will encounter in Poland, Hungary or Ukraine.

The best way to find out if other European stereotypes have some truth to them? Going there. Get proactive, save some money, see things for yourself. The world is out there, young man.

But before you finally embark on your very own Eurotrip, why don’t you brush up on your knowledge on travel safety in the mean time? Reading about bar scams in Eastern Europe might just come in handy after the one or other shot of Absinthe.

Until then – happy traveling!

Read next: The Most Common Bar Scam In Eastern Europe