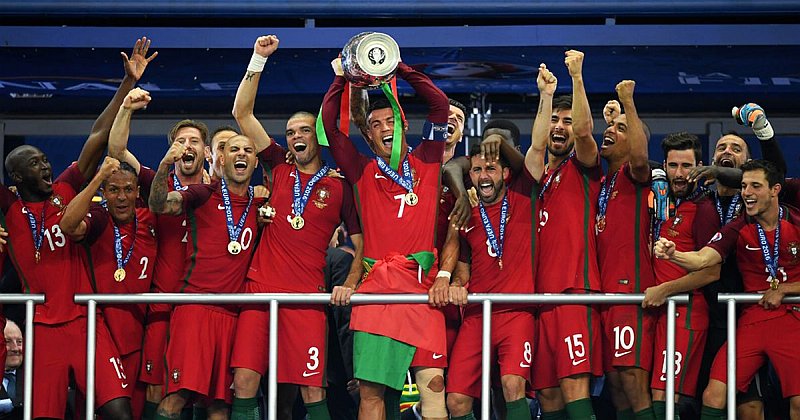 HOW PORTUGAL WON THE EURO 2016

The Portuguese are seen as the undeserved winner of the EURO 2016 by many. We are analyzing how 'Ronaldo & Co' managed to land one of the surprise hits of the year.

Out of the 24 teams participating in the EURO 2016 there is only one that will come away perfectly happy. This time it was Portugal. Along with saying this, I also have to apologize for picking them to be the biggest letdown of the EURO’s. All credit to Ronaldo and his men, they did pull off a rare feat.

Rare, because I can not recall such a terrible team winning the tournament before ever. Don’t get me wrong, I know the facts speak for themselves and safe to say that I, personally, would never win anything like that. Also, I am aware that fortune favours good teams in football. But the Portuguese taking the cup home was simply beyond everything. In all fairness they should send a thank you-note and a big bouquet of flowers to Michel Platini for rearranging the organisation of the games, essentially enabling Portugal to advance from their group in third place.

From Hissy Fits to European Championship

After two games, they seemed hopeless, not only because of their agonozing draws, but because the lack of break-through power and killer-instinct was highly worrying and pointed out a long-standing issue of theirs under coach Santos. The draw against Hungary was a different story, nonetheless it led to Ronaldo’s infamous hissy fit. Also, after playing such a great game against the mighty Magyars, I don’t see how they got the idea to subsequently play two of the worst sporting matches in modern history.

In the game against Croatia, we saw two teams having no idea at all what to do. The thing for sure was that neither of them wanted to attack. To Portugal’s credit, in retrospect we could see what their aim was, namely to lure the Croats out of their shells which they foolishly did in the last minutes of extra-time for which Portugal punished them perfectly.

Against Poland this didn’t happen, but the idea was similar. And this is the key point here. After the terrible group stage, boss Fernando Santos realized Ronaldo’s and Nani’s dynamism can be very well exploited in counter attacks. So instead of trying to overpower their opponents in the offensive zone they sat back, slowed the game down and waited for an opening.

Well, the new-found strategy of counter attacks did not work all that well against Poland. The Poles kind of figured it out and managed to take the lead very early, forcing Portugal to adjust to their game. So if we are talking about Portugal being lucky, this is pretty much the only game were they were really fortunate, especially when you consider the penalties. 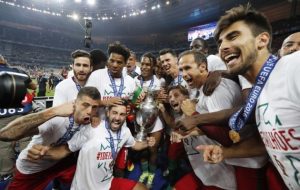 No more hissy fits: after swapping jerseys with the defeated French, Portugal poses for a victory shot. Photo: REUTERS

However, this system worked perfectly against Wales. The Welshmen stood for their all-out style of football for which they deserve all our admiration. But this meant they were no danger to Portugal who were on top of the Dragons all game long. Thinking about it, it’s saddening France was so bad and cowardly in the final, because we did not really get to see how Ronaldo & Co are able to respond and counter, if a truly strong opponent figures out and crushes their approach. This would have been an interesting and final-worthy sight, albeit it was never to be seen, thanks mostly to Ronaldo’s injury.

Did Portugal Deserve to win the Tournament?

Did they deserve the trophy? Afterall, they did. Afterall, they were the ones going all the way went all the way, so argueing over it will become less and less fruitful. Were they really the best team? No, not at all. Far from it, actually. But they did best to exploit their luck and the opportunities they had which to be fair is a key component in general to win any major tournament. However, it would be hilarious to see them now failing to qualify for the World Cup which is not even that far from being possible.