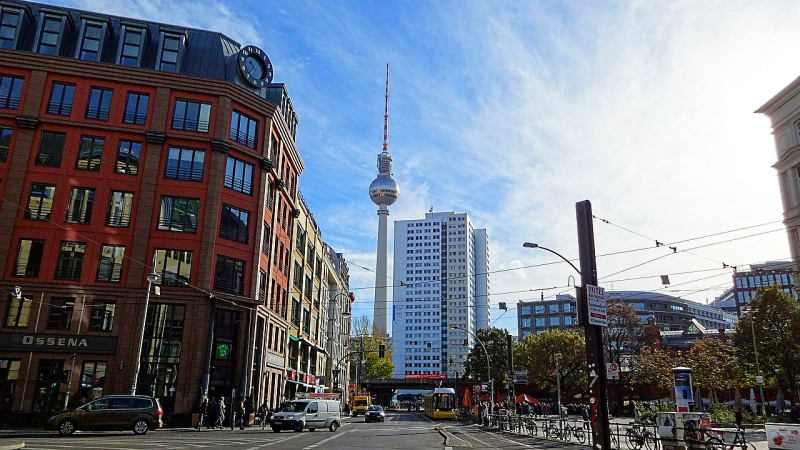 Apartments In Berlin And How To Get Them

As the whole world knows by now, Berlin officially is a great city for single men. But how do you set up shop in a city of 4 milion without knowing anyone and without speaking a word of German? How do you rent an apartment long term so you can avoid bargaining on Airbnb.com or staying in overpriced hotels? What are the ins and outs of renting an apartment in Berlin?

This is where this guide steps in. All your questions shall be answered and we shall see to it that you get yourself a nice and cozy apartment in Germany’s thriving capital. After giving you a breakdown on what the current situation in Berlin is like in regard to flat and apartment rentals I will show you step-by-step how you can land yourself a nice long-term contract in the largest city in Central Europe. Let’s get right into it.

Berlin is huge. Almost 4 million people live on an area that is just as huge. Did you know that the area of Berlin is 9 times as big as that of Paris? If you thought that wandering around Sacre Couer and the Eiffel Tower was exhausting then wait until you get to meet Berlin’s over-spacious streets and alleyways.

The most striking fact about this spread-out and densely populated city is that these days only a ridiculous minority of its population are actual born-and-bred Berliner. 75% of all people you will encounter in the streets, the shops and escpecially in nightlife are either new in town or can count the years they have lived in the city on one hand. How did this come about?

The fall of the Berlin Wall in 1990 left the 1,3 million people living in East-Berlin in a bad situation. Their former socialist economy was replaced with makeshift capitalist take-overs, leading to one of the highest unemployment rates post-war Germany had ever seen. As one consequence an abundance of East-Berliner left their home in order to seek employment elsewhere in the country. On the other hand more and more companies from Western Germany started to build branches in Berlin. Finally, in 1999 the German parliament moved from the Western German city of Bonn to Berlin, dragging a whole string of national agencies and offices along with it: people who had been working in some MP’s office down in Bavaria now had to face big city life in Berlin as that was where their office moved.

Due the constant restructuring and the low demand in apartment rentals during the years of 1990 to 2000 Berlin also acted as a magnet for all those self-absorbed characters that Robert Ezra Park named the pioneers of gentrification. For almost a good decade Berlin was as “hip” as Prague and to this it day attracts all kinds of hipsters, “artists” and New Age freaks from all over the world. This not only shows in the streets of Friedrichshain and Kreuzberg which at times resemble more a circus than a capital city. Most importantly for us, however, being “hip” shows in the sphere if renting prices: starting roughly in the years of 2005 – 2007 renting prices for flats and apartments in Berlin have more or less exploded. And nothing indicates they will go down any time soon.

Don’t believe me? Have a look at the infographic below showing that Berlin has had the heaviest increase of renting prices in the whole country of Germany.

Things got so out of hand that the Germans resorted to their favorite measure of regulation. They imposed imposing a federal law that would outlaw raising rent over a certain degree. Law or no law, prices in Berlin are still comically low in comparison to all other major German cities. But if you expect renting prices á la 1994 then I will need to tell you that you are late for the party.

A well-maintained bachelor place, read: 1-bedroom or studio apartment in a halfway central location will cost you in between 475€ to even 800€. Included in that price are all utilities like hot water, electricty and even internet which will cost about 15€ per month.

As basically every part of Berlin is well sought-after there is no real “bargain area” that would guarantee you good housing at a reasonable price. The only option where flats and apartments are to be had for relatively little money would be the East of Berlin that has quite a bit more vacancies than the rest of the city. Albeit those will be almost exclusively in tenement-style housing which might just look as inviting as this:

It is obvious that noone really wants to live there. But if you are willing to spend 500€+ per month on rent then you might just find an adequate place to stay in one of the characeteristic Berlin apartment houses. In this case, things will look somewhat like this:

How to find apartments in Berlin

How do you get your hands on a nice place to stay in the city? When looking for rental offers on the internet (newspapers are dead) then the good news is that you can focus all of your efforts on four websites. Sorted by importance and your chances to find an apt offer those are:

With the “wg” standing for “Wohngemeinschaft”, the German word for living in a shared apartment, and “gesucht” translating as wanted wg-gesucht.de is by a large margin the biggest website for apartment rentals in the German speaking world.

It offers basically everything from rooms in shared apartments to stand-alone flats of any size. Apart from having the largest variety on offers the biggest plus of wg-gesucht.de is that realtors/real estate agents/rental companies/other bloodsucking vampyres are forbidden to post there. Even at the size it is right now, wg-gesucht.de still manages to kick out any offer that charges a fee in order to rent an apartment to you. All offers you will see are made by people like you and me who are either looking to sublet their apartment or for someone to take over the place/contract as they are moving out – big thumbs up for wg-gesucht.

This was one of the first German internet websites ever to list rentral offers. Founded in the late 1990s the site has a somewhat dull vibe to it. Not a big surprise since it was brought to life by Deutsche Telekom, the (former) state-owned bureaucratic mega-machine that until 1995 had the state-guaranteed monopoly on virtually anything related to communication.

Immoscout as it’s called by the Germans only has a minimal offers on shared apartments, but has lots on regular long-term rent. Their search function allows you to look exclusively for offers that don’t come with a broker’s commission. Be sure to check the box reading “provisionsfrei” in the advanced search options to avoid this blood-sucking fee. Immoscout’s history as the child of crummy first generation German web developers still lives on as the site has no English interface, but comes entirely in German.

Ebay’s classifieds, Kleinanzeigen in German, serves as Germany’s equivalent to US-based craigslist. Its growing section on apartment rentals features regular rent as well as shared housing and just like with Immoscout you can also weed out realtors by searching for “provionsfrei” (commission-free) offers exclusively.

This site actually was around before wg-gesucht.de and used to be way bigger. For unknown reasons studenten-wg.de nowadays seems somewhat deserted. Nonetheless, with a similar no-commission approach like wg-gesucht the site still has some good offers both on shared living as well as regular apartment rentals.

The one trick about renting an apartment in Berlin

Over the rooftops of Berlin

Before we get to the details on how to rent an apartment in Berlin let me just fill you in on the one trick that will be your best option to find long-term rent in Berlin:

When in Berlin always go for a sublet first

It is that simple. Luck has it that Germany embraces a vivid culture of subletting apartments. And nowhere else in Germany is it easier to become a lodger than in Berlin. In fact, there are so many foreigners living in the city that you have a high chance your future sublet-landlord will be an (English speaking) foreigner himself. Some guy from New Zealand who is going back home for a month or someone from Venezuela who decided to go on a 3-month trip across Europe – these are actually common scenarios behind the offers on wg-gesucht.de.

Going for a sublet instead of trying to score a regular contract comes with these great advantages:

How to approach and seal the deal

Now that you know what kind of offer to look out for and where to find these offers let us have a look at how to make appointments in order to check out apartments. Here is the website of wg-gesucht.de as of August, 2015:

All you have to do in order to get to the sublet offer is to pick “Short term” as your desired type of rent. If you like you may enter a minium size in square meters or a maximum price in the fields right to the rent type and then click Enable Filters. You will now be presented the results of your search in a list that will look like this:Now

Now that one offer does look good doesn’t it? Let’s see … a one-bedroom flat in Prenzlauer Berg vacant from mid-September 2015 to the end of March 2016. For the total price (wg-gesucht.de only lists rent prices including all utilities) of 650€ per month this seems like a bargain! Let’s have a look at the offer by clicking on it. We now get to the offer’s page:

Looks alright so far, doesn’t it? Now, here is a step-by-step guide on how to proceed in order to get Mr or Ms Schumann to show you their place and, hopefully, accept you as their new lodger.

…and that about sums things up. You are now equipped with the advanced basics on how to rent an apartment in Berlin. The advice in this guide can be applied to any major German city. You have to keep in mind, though, that Berlin is by far the easies place to get a sublease as the Berliner – or those non-Berliner that made the choice to live there – have a reputation for being the most laid-back Germans you could come across. And there is much truth to that stereotype.

Nontheless, renting an apartment in Berlin or in any other German city comes with a downside. In closing I am giving you 5 nasty things about renting a flat in Berlin that will get nastier the higher the local demand for vacancies. Here we go:

3 nasty things about renting in Berlin

The first one you will only come across if you are looking for a regular long-term contract. It will not occur with subleases.

More good stuff coming soon: In the next update we will introduce The 5 Boroughs Of Berlin. Be sure to sign up with our newsletter to get updated when the post goes live!

What Does It Cost To Live For a Month In Kiev?

Nightswapping — An Alternative To Couchsurfing And Airbnb?